Well, that winter sure flew by fast. Skis ski boots, and snowboards were pretty good for delivery. Clothing, bags, or anything that was stitched was another story. We saw a stream of jackets and pants arrive throughout February which helped keep the showroom looking fresh. Bags on the other hand were a struggle, as we only saw 10% of our orders get delivered. These issues are hopefully going to be remedied for next season as orders were submitted earlier to ensure on-time delivery, and the 2022/23 product is slated to start shipping in early August.

Customer interest was once again through the roof as we are seeing more and more families and other people who haden’t gotten on the snow for a few years get back out there. Even with the lack of snow in February, people were still heading out west and the lack of coverage sure kept our tuning shop busy!
When we get to March, that’s when the staff gets to start their travels. Jake and Chris both went to Jackson Hole. Chris had the perfect timing getting well over 2 feet of snow while he was there. Jake, not so much (but a day on the slopes is better than a day of work). David is heading out to Steamboat in Early April and Scott will be hitting up the San Juans a couple weeks after David.
We also started to see kayaks in March and the people that weren’t able to get kayaks last summer started to inquire. Our Loon S.U.P. delivery is expected by the end of this week.
Even though the days are starting to get longer with more abundant sunshine and the snow is starting to melt, ski hills should be open for another couple of weeks as we start to say goodbye to the ski season and transition to paddlesports. 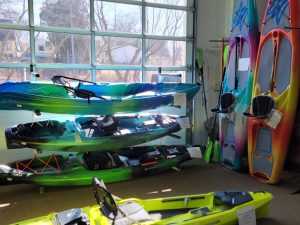 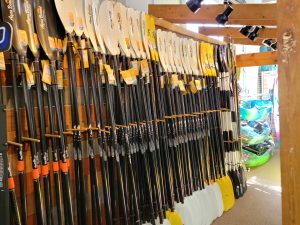 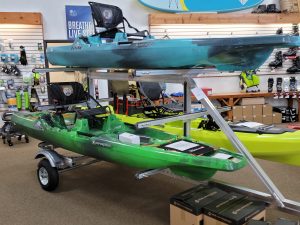